The Truth About Curcumin

In more recent years, the anti-carcinogenic activity of curcumin both in prevention and treatment has been studied in colon, bone narrow, breast (Liu et al., 2013), prostate, and lung cancer (Sharma et al., 2001; Gomez-Bougie et al., 2015; Tieten et al., 2010; Tsai et al., 2015). While curcumin has been established as safe and nontoxic at high doses in humans (Krishnakumar et al., 2015), how curcumin has such a diverse range of medicinal effects is less understood. 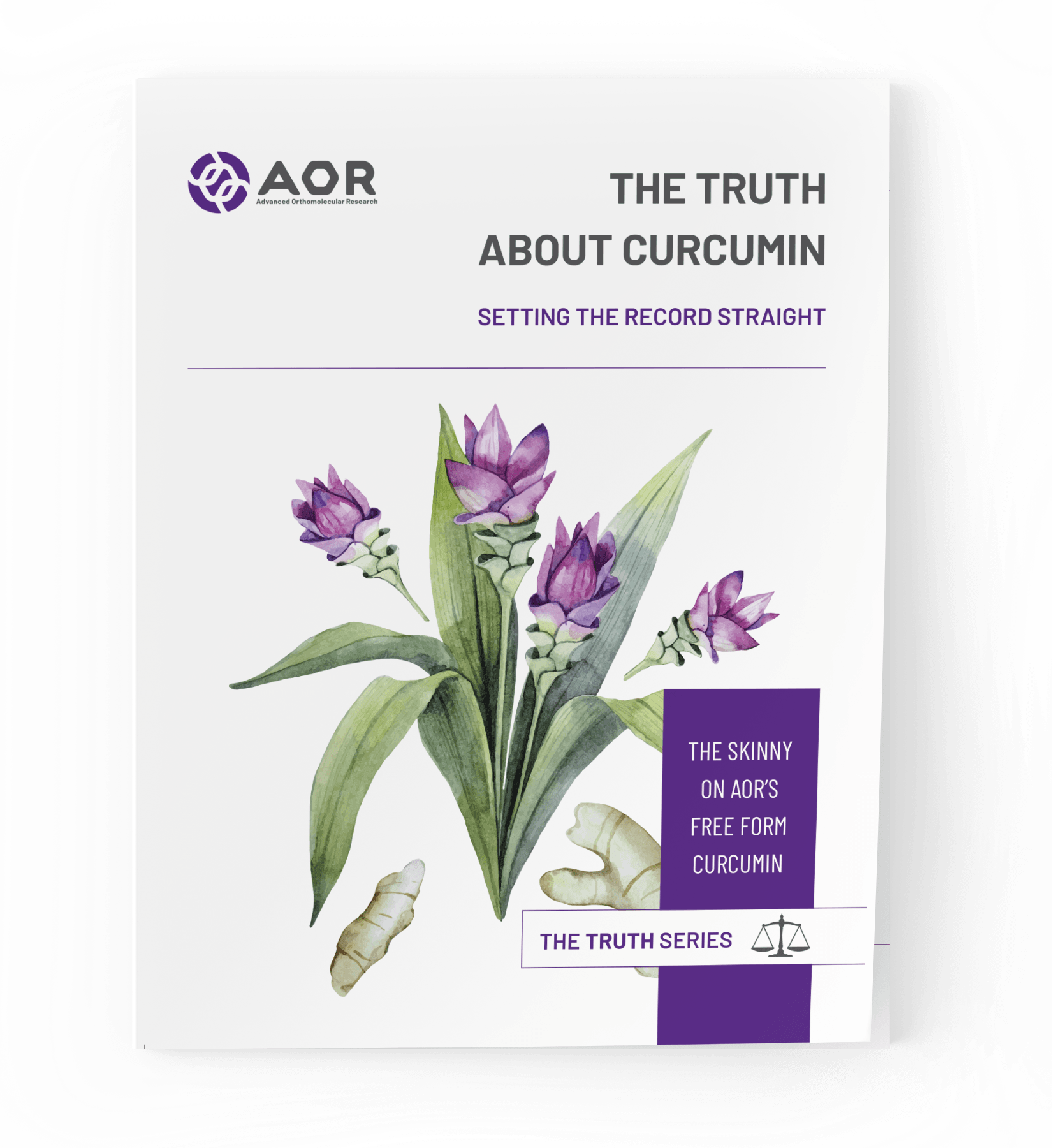 The Skinny on AOR’s Free Form Curcumin Now that curcumin is the hottest thing since sliced bread, we feel it is time to finally set the record straight and get down to the nitty gritty bits of what makes a truly superior, effective curcumin formulation. So, let’s take a few steps back and start at the beginning. Curcumin—one of the active ingredients in turmeric root is one of three bright pigments that give it its beautiful golden colour. As a whole, these pigments are known as curcuminoids. Traditionally, turmeric root has many uses: as a digestive aid, preservative, and blood purifier, but

The Next Step in Curcumin Evolution

With integrity informing every decision, we never settle for mediocrity by ensuring complacency never takes hold. Because if it were to do just that, evolution would cease, and cutting-edge breakthroughs towards better medicine may never come to be. It is with this fierce dedication to continuous, diligent innovations, we always pave the way forward, rather than simply imitate by following others. Because curcumin has literally hit a glass ceiling in terms of truly innovative delivery methods, AOR was inspired to challenge this and make something unique. This brings us to the next step in curcumin evolution, Curcumin Ultra®. Comprised of

Delving Into The Science: Breaking Down Clinical Research

Although interfacing with clinical data can even make our heads spin at times, it’s important to have an understanding of what actually makes a good, viable study. Measurements: Unfortunately, many publications report the bioavailability of curcuminin without actually distinguishing between free form curcumin, curcumin metabolites, and total curcuminoids (curcumin, DMC, BDMC). This will inevitably skew what was actually measured in sample blood, versus what is reported in the corresponding publication. Don’t forget about our little friend Beta-glucuronidase either, seeing the use of this enzyme further skews results generating false values for Free Form Curcumin. For the sake of accuracy, simple

In more recent years, the anti-carcinogenic activity of curcumin both in prevention and treatment has been studied in colon, bone marrow, breast (Liu et al., 2013), prostate, and lung cancer (Sharma et al., 2001; Gomez-Bougie et al., 2015; Tieten et al., 2010; Tsai et al., 2015). While curcumin has been established as safe and nontoxic at high doses in humans (Krishnakumar et al., 2015), how curcumin has such a diverse range of medicinal effects is less understood. The liver is the major organ responsible for metabolizing or breaking down substances. When something is ingested, it is normally absorbed into the

An Overview of Bioavailable Curcumin Formulas

Theracurmin™ is a nanosized curcumin formula made from a mixture of micronized curcumin and gum ghatti solution. Theracurmin’s particle size is reduced via a wet mill grinding process and then dispersed using a high-pressure blending technique. This creates a colloidal suspension that is highly water soluble. BCM-95® is a patented curcumin formula that combines curcumin and volatile agents in turmeric essential oil to increase bioavailability. The formula is also comprised of lecithin and medium chain triglycerides to further assist in this process. Turmeric essential oil constitutes approximately 9% of the formulation. Meriva® uses micelle technology to create a patented Phytosome®

Getting Curcumin into the Body

A History of Turmeric

Turmeric possesses a rich, deep, bright orange/golden color due to its high content of pigments known as curcuminoids. These beautiful pigments are known as fluorochromes, meaning they are fluorescent! This explains why turmeric has been used as dye, a coloring agent in paint, and why it stains so easily. These pigments are truly unique and very special, seeing they are mostly responsible for turmeric’s therapeutic activity. There are three active curcuminoids present in turmeric: curcumin, demethoxycurcumin (DMC), and bis-demethoxycurcumin (BDMC), with curcumin being the most concentrated. It comprises approximately two thirds of total curcuminoids, while the other two comprise the

Benefits of Curcumin for Cognitive Health

Curcumin is the active compound in turmeric, which is a tuberose rhizome that is part of the ginger family. Turmeric root is traditionally grown in India, where it has been used for centuries to treat a broad range of illnesses. It’s also a common ingredient in Indian cuisine. The beautiful hue of turmeric is but a hint of the bounty of benefits that lie within its cellular makeup. Curcumin Acts as a Natural Anti-Inflammatory Chronic inflammation is a condition that keeps the body in a constant state of stress. It’s brought about by many factors including poor diet, lack of